Wonderful wizard of a show

From Year 7 right up to Year 10, talented teenagers from St Aldhelm’s Academy all played their part on putting on a show to remember.

There were 33 students in the cast and even more helping out with lighting, stage crew, making props and designing the programme and posters.

And the school’s hair and beauty students worked their magic on transforming the cast into their characters.

Principal Jon Webb, said: “This was a really ambitious production for St Aldhelm’s, the first time we’ve done anything on this scale since Ambitions Academies Trust took over in June 2015.  It really was a school-wide show with so many of our students across all year groups involved in putting the whole thing together.  After months of preparation they performed brilliantly and we are very proud of everyone who played their part, from cast to crew.”

Year 7 student Polly Kirk took on the lead role Dorothy – and it was a family affair with her older sister Maisie playing the Good Witch.  The family connection did not end there for the Kirks with mum Kim helping to make costumes along with other members of the sewing group.

St Aldhelm’s Academy is part of Poole-based Ambitions Academies Trust, along with five other schools in Bournemouth and Poole.  The Wizard of Oz stars were able to test run their show with a full dress rehearsal in front of fellow Trust school Manorside pupils.  It was then shown across two nights to 400 friends and families. 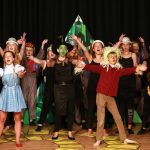 This website uses cookies to improve your experience. We'll assume you're ok with this, but you can opt-out if you wish. Read more.